A couple of weeks ago, Bryanne at Michelle Patterns emailed to ask if I’d like to participate in their Pinterest Challenge. I always love small project challenges so said yes, and then was a little surprised when she said she’d email me the schedule. Aren’t those usually linky parties or comment thingoos? Why would I need a schedule? A little bit later, I was shocked when I realized that she had been asking if I wanted to make a project to feature for their challenge! O_o That just made my day!

The challenge was to make a project that you’d pinned on Pinterest. I had actually transferred my pins to my bookmarks back when there was all that kerfluffle about their ToS, but since they’ve fixed it, I had fun pinning things back up. After a little bit of dithering, I decided to make my sister a Kitchenaid mixer cover from Heart of Mary’s tutorial. 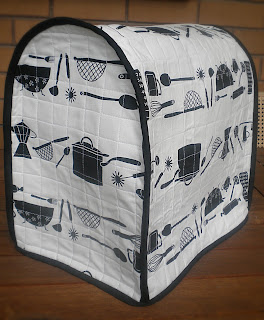 I wanted to make it fancy, though, so I also used Why Not Sew’s paper pieced mixer pattern and an embroidered alphabet from one of my Japanese craft books to make this:

It took foreeeeeever! First, it took me one night to make the pieced mixer. I cut out all my pieces beforehand, which made the piecing part really relaxing since I could just chain piece all the sections.

Then I embroidered the alphabet for a day and a night. I’m so slow! (The viola was a violin in the pattern, but my sister plays the viola. 🙂 )

It took me another day to sew the actual cover together. Isn’t it amazing how I can stretch out a project? Anyhoo, I made a pocket on the other U-shaped side — I figured my sister could throw her attachments in there, or maybe recipes. If it were living in my house, it would probably accumulate junk like old receipts and mail. ;> I also pinned everything together before trimming my large rectangle piece; I’m finally learning after my Made in Cherry background fabric fiasco!

I used 2.5″ inch strips for my binding: normal ones for my straight edges, and bias ones for the curvy edges. The mini tutorial says to apply binding to the U-shaped part and then the bottom edge after sewing the cover together, but I machine bound (sew to the back and then sew down the front) the binding to the straight edges before sewing all the cover pieces together. I wasn’t sure how to go around 3-D box corners with binding, and I also wanted to hurry up and finish — it’s a lot faster to do a totally machine-sewn binding than a regular, half hand-stitched one!

Finally, I did a normal quilt-style binding around the curvy bits. I got to use my awesome new heavier-duty clips — $2 from the sale bin at the craft store! Yay!

Now it’s your turn: go to Michelle Patterns’ Pinterest Challenge post and link a project you’ve made from your Pinterest board for a chance to win two yards of Monaluna fabric from FabricWorm!

Thanks, Bryanne and Michelle, for inviting me to participate! 🙂